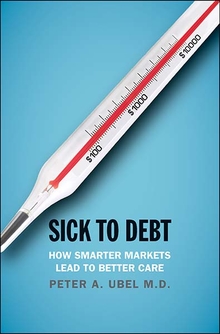 I have a book a coming out this fall. The book took many hours to write, with discarded chapters littering my Dropbox folder. My initial book proposal was rejected by every publisher I sent it to. After the withering critiques, I rethought the project and managed to convince the folks at Yale University Press to publish it. Sick to Debt will arrive in bookstores in November.

Why in God’s good name did I spend so much time writing a book, in a world increasingly focused on 280-character tweets and 700-word blog posts?

I’ve pondered this question for many years. In fact, I recently came across an essay I wrote in 2000, when my first book, Pricing Life, came out. Back then, Twitter and Facebook weren’t yet pulling people away from long-form writing. But I was still worried about the marketplace for books, in ways that show how quickly the world has changed. Here’s what I wrote back then:

Why waste time writing a book? The dominance of bookstore chains and Oprah have made it increasingly difficult for most authors to get their books in front of their target audience. Worse yet, people have less time to read books than they used to—cable TV channels multiply faster than the flick of a remote control button, while traffic jams suck away our remaining free time.

Oprah’s Book Club? Bookstore chains? If only authors could be so lucky today.

And yet here we are, two decades later, and I’m publishing my fifth book (and have already begun writing my sixth). If some of my earlier books had been best-sellers, my behavior would make rational sense. Atul Gawande would be stupid not to write more books. Me, on the other hand? In the time I write one non-best-selling book, I could write a dozen or more essays for leading journals, pushing out ideas to shape the intellectual landscape. Or I could write a couple more grants, securing funds to expand my research program. Heck, I could kick back and relax on Saturday and Sunday mornings rather than hunch over chapters that need major overhauls.

But I persist. I laid out a major reason for my persistence in that essay two decades ago:

But the truth is, I had plenty of selfish reasons for writing a book. It wasn’t for the money. It wasn’t for the fame. And it was not to increase my chances of being promoted! I wrote a book to consolidate my thinking about healthcare rationing. I had conducted a series of studies and published them in many medical journals. Writing a book allowed me to pull my research together, and place it into a broader context. In this regard, I wrote the book for the same reason I play piano every night—because it makes me happy.

There’s an even more important reason I write books. I think it is critical for us, as citizens, to intellectually grapple with the most important challenges of our time. Few things are more critical to democracy than an informed electorate. And some topics are best understood with deeper dives, certainly deeper than can be accommodated in an op-ed or Twitter “conversation.”

I wrote Sick to Debt because I think many Americans are fed up with the way our healthcare system increasingly shifts costs in their direction. I wanted to lay out the reasons, even the rationale, for such cost shifting. And most importantly, I wanted to show that there are better ways to tackle high healthcare costs than to pass them on to patients.

I hope to inspire people to push for changes in the way Americans pay for medical care. That’s why I wrote the book. That’s why I hope you read it.