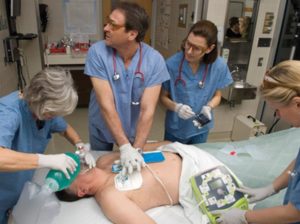 Thanks to the popularity of medical television shows, most people have witnessed hundreds of fictional cardiac arrests in their lifetime. In most of these scenes, the patient loses consciousness, and the medical team rushes to the bedside:
“He’s in V-fib.”
“Get me the paddles.”
The team performs urgent chest compressions for a few seconds.  Then they place the metal paddles on the victim’s chest:
“Clear!”  Kathump.
The patient’s heart is back to normal again, tragedy avoided.
On television, the outcomes of in-hospital resuscitations are commonly miraculous.  According to a New England Journal study from 1996, over 75% of “patients” who received CPR on popular television shows were brought back to life by the treatment with good outcomes — brains intact; ready to go.  In real hospitals around that same time, only 15% of patients experienced such good outcomes. The vast majority of patients who experienced cardiac arrests in the hospital back then didn’t survive resuscitation efforts, and many of the ones who did survive, whose hearts were successfully restarted, still ended up either dying before leaving the hospital, or sustaining major brain damage.
That was then, though, and now hospital code teams have a new weapon in their resuscitory arsenal.  That weapon is known as therapeutic hypothermia. (Read more and view comments at Forbes.)