For years now, the pharmaceutical industry has justified its prices and its profits by reminding us that their products eventually go off patent, and are then offered cheaply to people around the world in generic form. They warned us that the pipeline for new and innovative drugs is less and less promising, because so many major advances have already taken place. Skeptics retort that the pharmaceutical industry has been talking this way for decades, with no sign of their profits coming to an end.
But the pharmaceutical industry may finally be correct. And here is some more evidence to back up that claim. This comes from a study  published in October that looks at health care spending among Americans under age 65, receiving health insurance through their employers. The picture below shows a number of spending trends bouncing up and down over the last four years. But there in orange, steadily declining, is a line representing spending on prescription drugs. Such spending reached the point in 2011 that it rose less than the general rate of inflation. 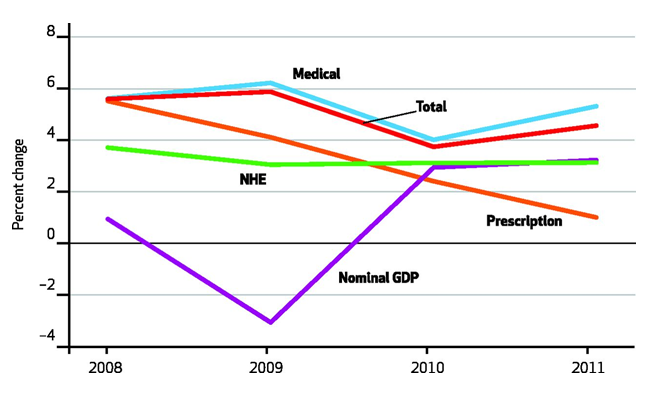 Four years might be a trend, but it is not an established pattern. Nevertheless, it is just the kind of evidence that brings plausibility to those in the pharmaceutical industry who say their best days are behind them.
(Click here to view comments)