Let me be clear: how long people live in any country of the world is determined by lots of things, not just by the quality of their healthcare system. Nevertheless, one of the things medical care is supposed to do is help us live longer and healthier lives. So you would think that a country which dramatically increases its health spending would gain more in life expectancy than similarly wealthy countries that do not increase such spending.
Your thinking would be wrong.
Here is a picture from The Financial Times, showing that in 1970 the US already lagged behind the UK and Japan in life expectancy by about one year, despite spending a little bit more per capita on healthcare. By 2014, the US spent more than twice as much as those other countries on medical care, with residents of the United States now living five years less than people in those other two countries: 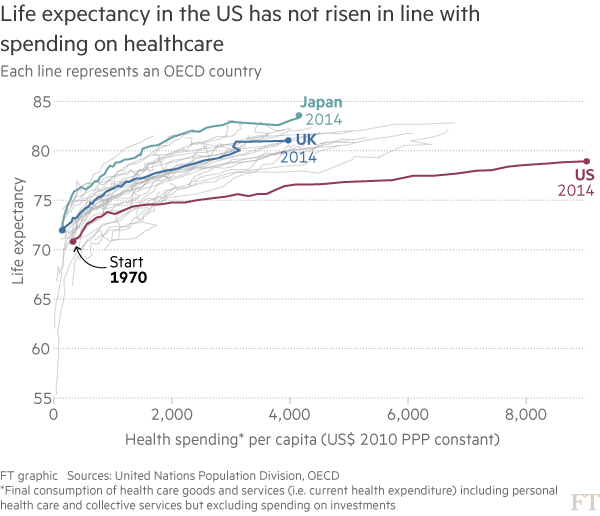 Again, this difference in life expectancy doesn’t arise simply from the quality of medical care in these three countries, but has lots more to do with eating habits, drinking habits, traffic safety, and the like. That said, it points out a real major problem – despite the great wealth of this country, we haven’t figured out how to help Americans live long and healthy lives.