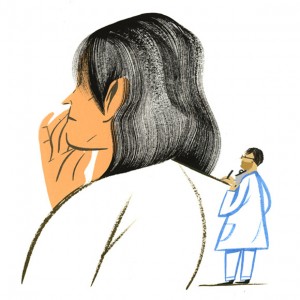 Elizabeth’s breast cancer had already spread to her bones and was now invading lymph nodes in her right armpit, causing painful swelling that kept her up at night. Today, however, as she walked into her oncologist’s office, Elizabeth felt like things were under control.
“All right, so how is your arm?” the oncologist asked.
“Actually, it’s better than it was,” she replied. “I mean, it still hurts. It’s still very swollen.”
The oncologist could see that her arm was getting worse. “I think those lymph nodes have gotten a little bigger, haven’t they?” he asked.

“I don’t think so. Well, I don’t know.”
“I think they’re bigger,” he said, as he placed his stethoscope on her chest. “A couple of breaths. Again.”
She exhaled one more time and made her position clear: “I’m still not in favor of chemo. Sorry. I’m not.”
“O.K.”
“I thought about it and … I feel like I would never go back to work. I feel like it would just do me in.”
Frustrated by the denials, the oncologist let his emotions get the best of him. “How about if this sucker is going to go and do you in?” he asked. “That’s going to happen, too. That’s the problem. It’s going to grow and kill you.”
This clinical encounter was audio recorded, in 2012, by a company called Verilogue, which conducts marketing research for the pharmaceutical industry. The conversation struck me as emblematic of the challenge that physicians face practicing medicine in an era of empowered patients. As recently as the nineteen-seventies, medical decision-making in the United States was largely a doctor-knows-best endeavor…
(Continue reading on The New Yorker)