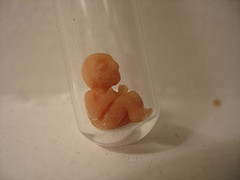 The first test tube baby was born July 25th, 1978 in the north of England.  Louise Brown was called the “baby of the century” by some and a “moral abomination” by others.  It wasn’t Brown who critics accused of being immoral, of course.  She was just a blameless infant.  Instead, it was her doctors who came under fire for their new fertility treatment—in vitro fertilization (or IVF).  Roman Catholic theologians characterized this treatment as “unnatural”.  Bioethicists fretted about the risk such treatments posed for mothers and children.
But all these critics of IVF missed the true immorality behind Louise Brown’s birth.  Brown’s doctors never told her mother that IVF was a brand new procedure… (Read more and view comments at Forbes)