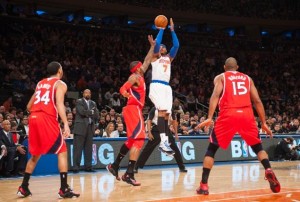 A jab to the right, then Carmelo steps back behind the three-point line and launches a shot. It clanks off the back of the rim. How likely is he to be the next person on his team to attempt a shot? And what are the odds that his follow-up shot will come from behind the arc?

NBA players are paid enormous sums of money to make good decisions on the basketball court. To thrive in the league, they learn to pick their spots. Some players know they should avoid three-pointers at all costs, some only take such shots when they are wide open and can set their feet, and others (Steph Curry being a great example) have a green light to toss up three-pointers just about whenever they desire.

But what happens when an NBA player misses a shot? How does such a failure influence the distance and timing of his next shot?

Psychologists have known for a while now that sports enthusiasts believe too strongly in the idea of the “hot hand” – that once a basketball player makes one or two fifteen-footers, he has proven himself to be hot and should, therefore, be fed the ball more often so he can continue his hot shooting. This hot hand theory has been shown to be fallacious, with research establishing that the likelihood of making an NBA shot has, at most, only a slight correlation to the success or failure that same player experienced with his previous shot. The majority of studies in the academic literature have shown that the outcome of the previous shot has no correlation with that of the subsequent shot, once you adjust for the average field goal percentage of the player from the distance in question. Some studies show a small correlation, but even these studies do not dispel the fallaciousness of the hot hand theory, because most of us perceive the correlation – the hot hand – to be much greater than it is… (Read more and comment on Forbes)