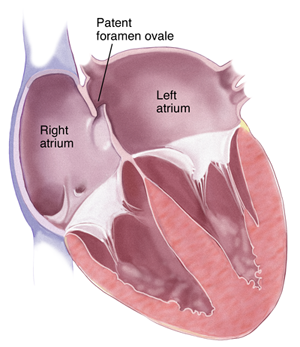 Ten years ago, my tennis partner suffered a stroke.  He was a sixty-year-old at the time, working to move up into the top ten players in his age group.  In the country!  You could not have found a healthier sixty-year-old.  He played tennis three-plus hours a day, scampering across the court like a hyperactive adolescent.  In other words, he was not the kind of cigarette smoking, hypertensive elderly man you would expect to experience a stroke from clogged and battered arteries.
I wasn’t shocked to learn, then, that he had a PFO—a patent foramen ovale.  The foramen ovale is a passageway connecting the right and left atrium in the heart, a crucial opening for all of us when we were fetuses because it allowed our bodies to shunt blood from the right and left side of the heart without having to pass through what, in those circumstances, were non-functional lungs.  For most of us however, the first time we took a breath of air after being born, our foramen ovales began to close, the two sides of the wall separating the atria eventually fusing.  But in the case of my tennis partner, that FO remained a PFO.  He lived for sixty years unaware that there was a hole still open between the two sides of his heart.  Eventually that PFO contributed to his stroke, providing an opening for a blood clot to sneak across to the left side of his heart where it then was pushed, with the contraction of his left ventricle, up towards his brain.
My tennis partner survived the stroke and was soon playing tennis again.  Determined not to experience another stroke, he chose to have his doctors close his PFO.
But should he have made that choice?  And should his insurance company have paid for the procedure? …(Read more and view comments at Forbes)