Obamacare dramatically reduced the number of people in United States who lack health insurance. Reduced as in: brought the proportion down to historical lows. Yet very few Americans knew this about the law, which is part of the reason why so many people didn’t like Obamacare. Here’s evidence to back up that connection, from the Kaiser Family Foundation: 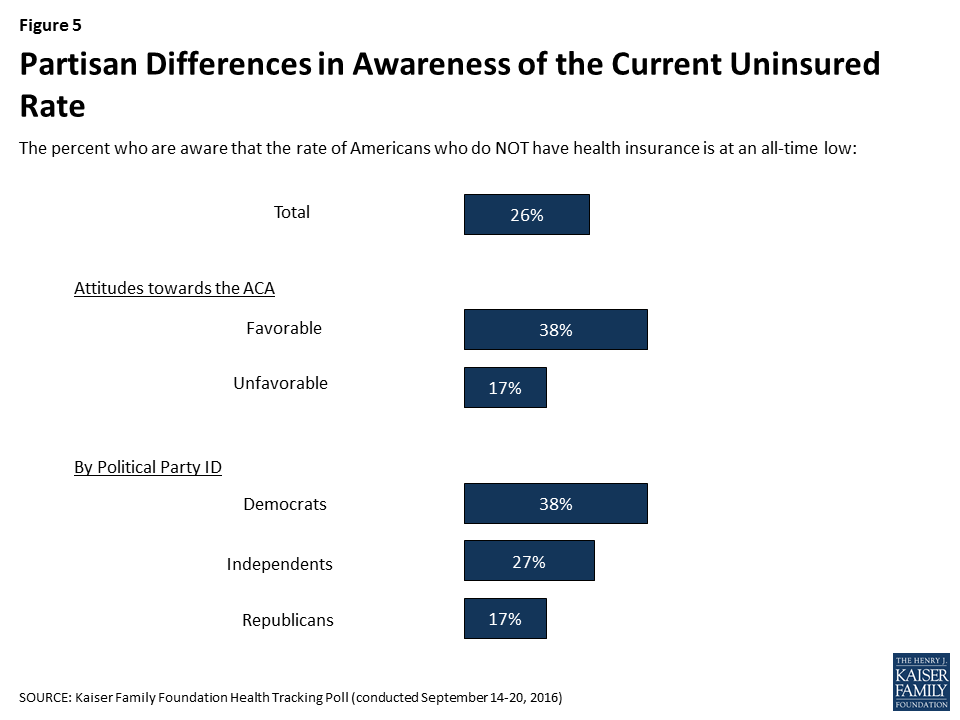 Hard to like a law that hides its best features.

I was raised in a family that hates taxes. Not hates taxes as in “Gosh, it’s too bad such a high percentage of my paycheck goes to the government.” More like: “How dare the government steal my hard-earned money and give it to undeserving moochers!” (Is there such a thing as a deserving moocher? Sorry, I digress.)
The origins of this anti-tax sentiment are deeply ideological, steeped in a frothy mix of conservative and libertarian principles. My family loves freedom, property rights, and the Protestant work ethic (even though they are Catholic). Their attitudes towards taxes spring forth from their deepest moral values. It’s not just the taxes that bother my parents and siblings, but the thought that income is being redistributed to unworthy people.
Or so it seems. Evidence is now accumulating that people’s attitudes towards topics like taxes and income redistribution are more fragile than many of us think, and that sometimes our desires – for social status, and for income we may or may not have earned – take hold on us, forcing us, unconsciously, to later embrace political ideologies that coincide with our preceding desires. When it comes to our attitudes towards taxes, we feel first and think later.
(To read the rest of this article, please visit Forbes.) 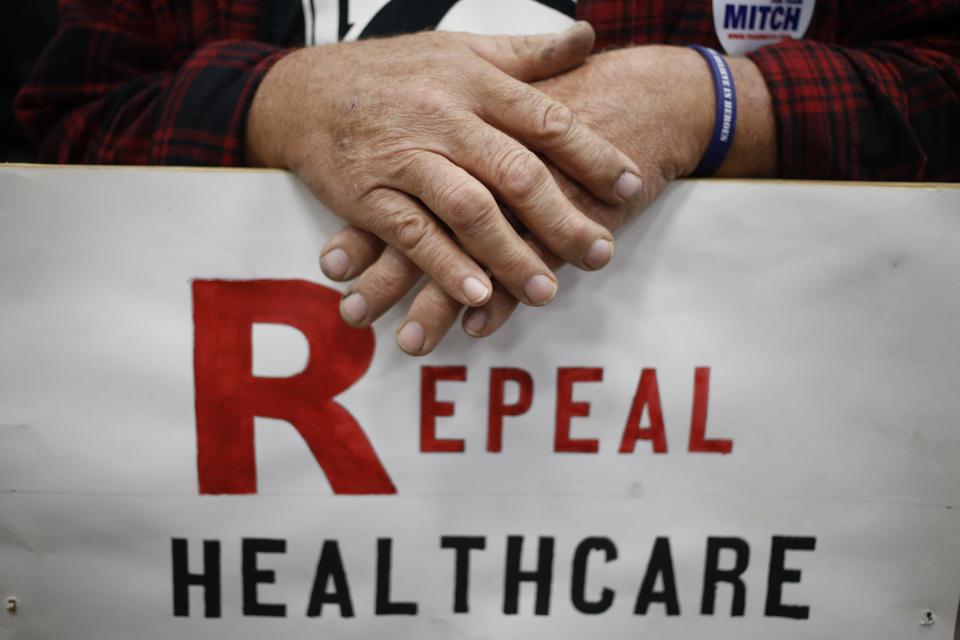 The world is complicated. It’s hard to know what the federal government should do about a whole range of problems. That’s why most people take a shortcut, and judge policies based on their opinion of the people who support or oppose those policies. If you like someone, and he supports a policy, then you are more likely to think the policy is a good idea.
Take this clever, if not totally surprising, poll reported on in the Huffington Post – which showed dramatic changes in support for universal healthcare depending on whether people thought Barack Obama or Donald Trump supported the idea: 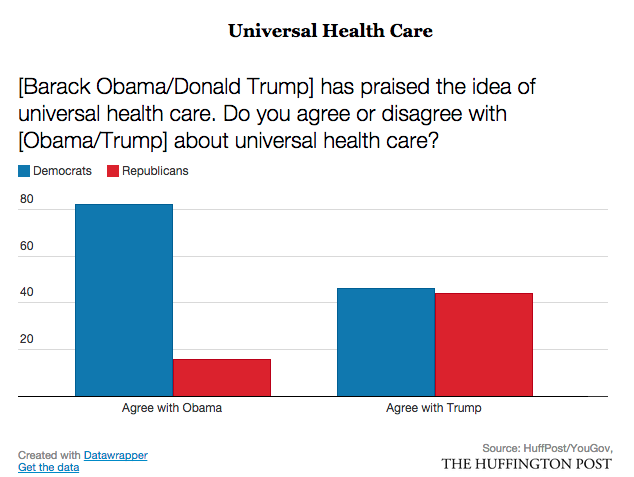 As with much of partisan politics, there’s no political party immune to these strange patterns of belief. God bless America!

Here is a chart from the Washington Post, showing the percent of people lacking health insurance over the last few years. For a long time now, a higher proportion of Democrats have been uninsured than Republicans, with low income and minority communities experiencing a disproportionately high uninsurance rate. But since Obamacare has come into effect, a lot of Democrats have signed up for health insurance who never had it before. But Republicans have lagged behind, and now it looks like they might be experiencing higher uninsurance rates than Democrats: 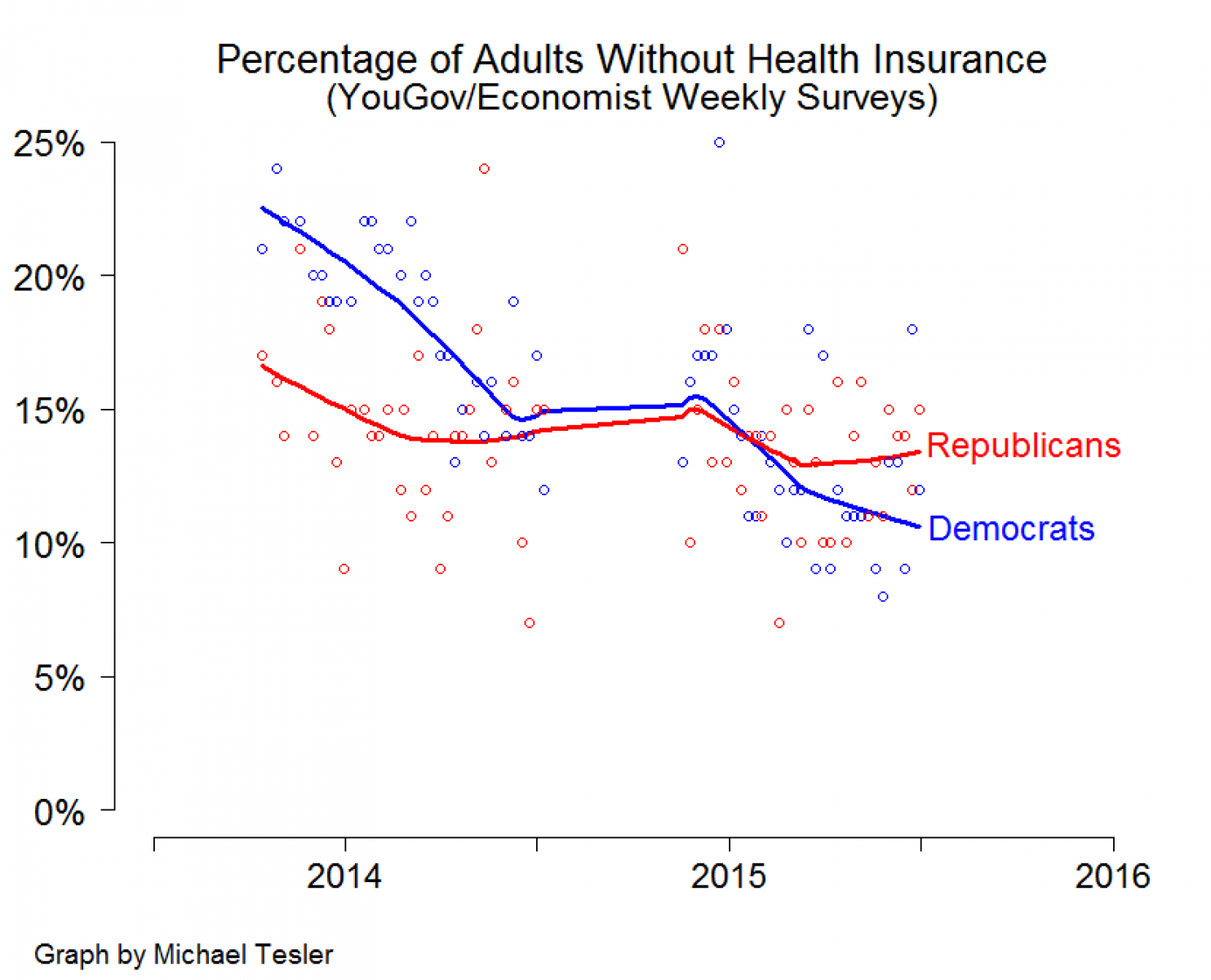 To their credit, at least Republicans aren’t being hypocritical!

President Ronald Reagan was famous for espousing anti-government views. To this day, he is lionized by Republicans, who frequently quote his “less is more” attitudes towards government. Which makes it kind of ironic that when he was in office, Republican faith in government rose significantly. In fact, when you ask people whether they trust the government to do what it ought to do, their answers are strongly influenced by whether the person in the White House shares their political allegiance: 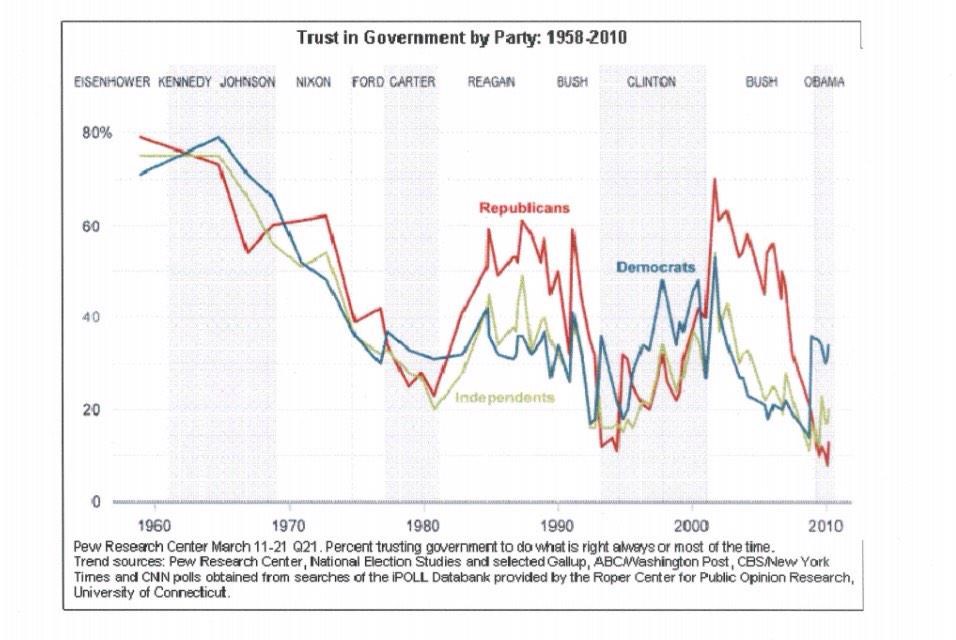 It also appears, according to recent trends, that Republican faith in government is much more volatile than that of Democrats. I’m sure that has a lot to do with how demonized the last two Democratic presidents have been, by Republican pundits. But interestingly, Democrats don’t seem to experience enormous increases in their faith in government when someone from their party is in office.
The world is an interesting place. 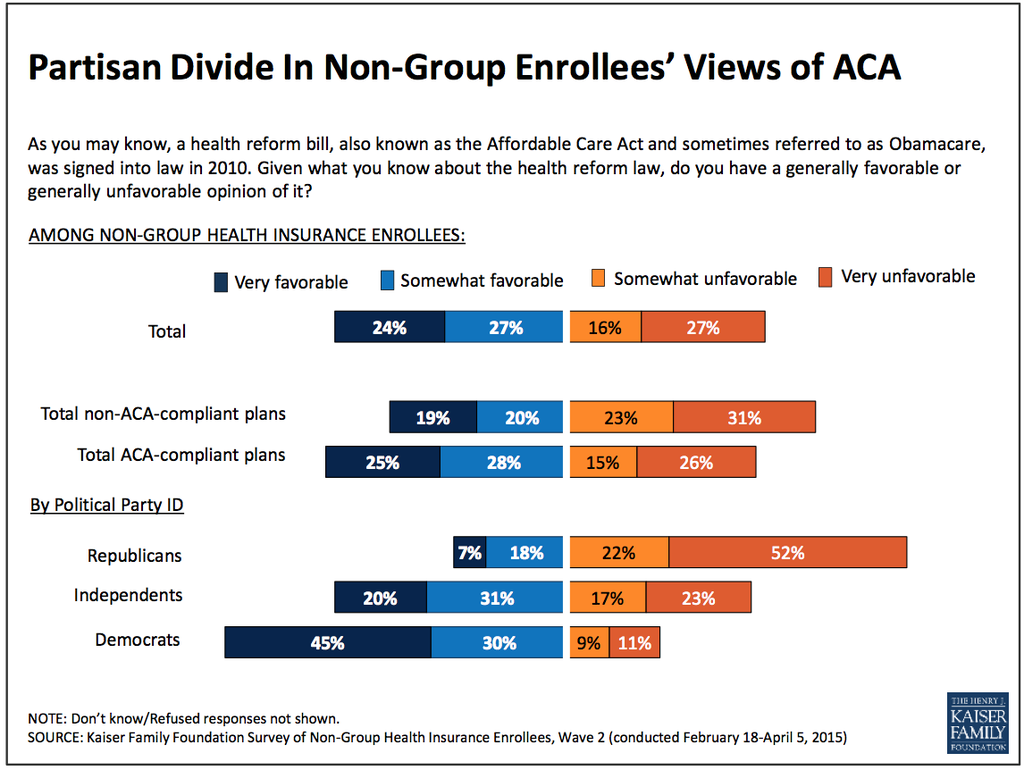 Notably, they dislike the law even though they LIKE THEIR INSURANCE:
I look forward to the day when we can get beyond our attitudes towards this law, and join together to improve our nation’s healthcare system.

Sometimes when I disagree with friends or family about contentious issues, and they accuse me of being partisan, I try to defend myself by explaining that I am basing my position on science, not politics. According to a recent poll, my defense is flawed, because it seems that science itself is partisan. Across a relatively wide range of issues, Republicans are less likely to follow scientific advice than Democrats, even on some issues I wouldn’t have guessed – like animal testing for medical research, and producing biotech food and crops. Here’s a picture showing these attitudes: 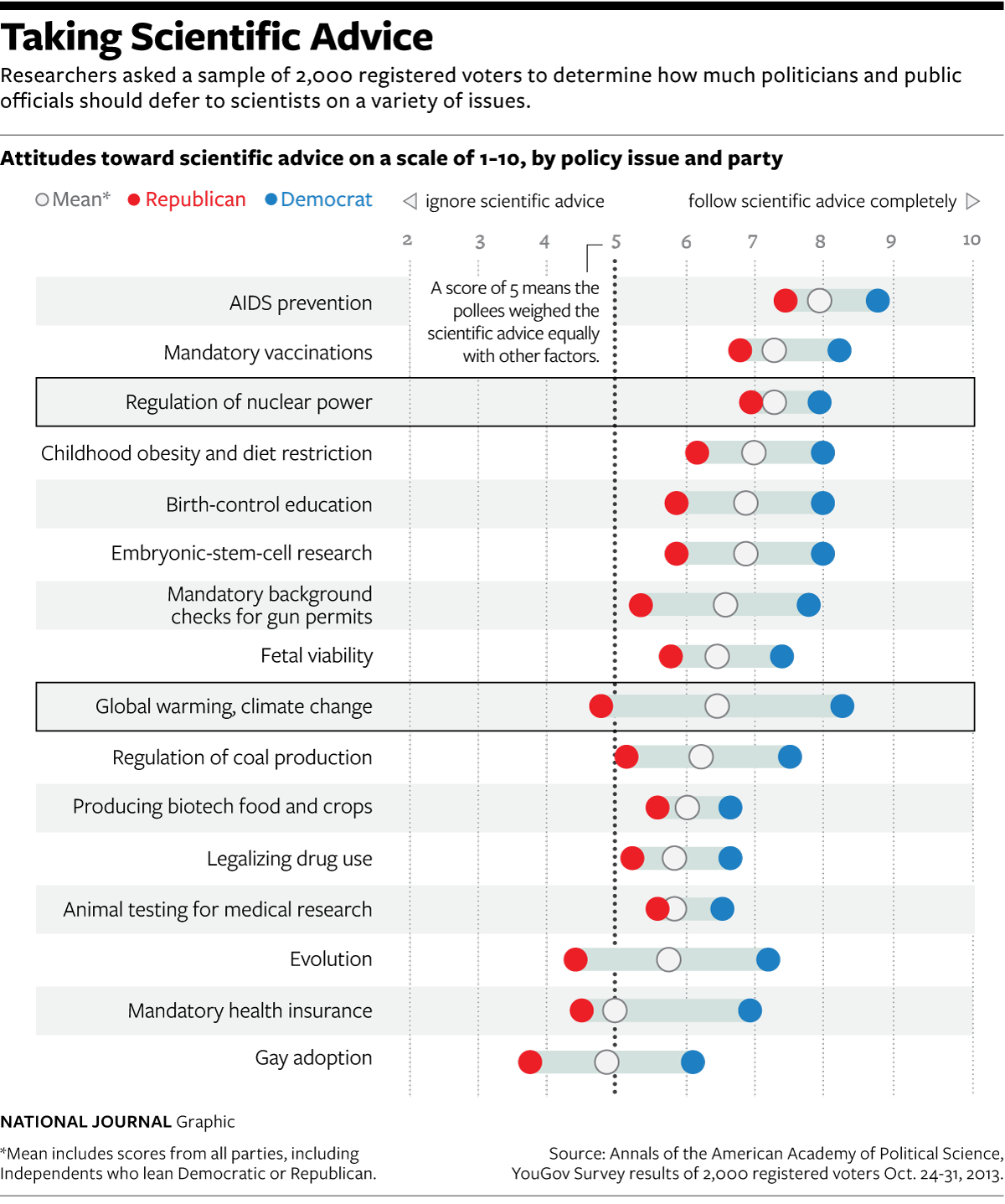 In short, far too many people on both the left and the right don’t have enough trust in science. The problem seems to be especially large among people who identify as Republicans.

My home state of North Carolina is one of a number of states that refused to expand Medicaid, even though the Affordable Care Act stipulates that the federal government will cover the majority of expenses associated with such expansion. Here is an excellent story in the Fayetteville Observer laying out the issues:

Denise Johnson works six days a week in the laundry room of a hotel on U.S. 301. The 58-year-old Fayetteville resident doesn’t work enough hours to be considered full-time and doesn’t receive health benefits.
Johnson applied for Medicaid at the Department of Social Services, but she was ineligible because she made too much money. Then she tried signing up for subsidized health insurance coverage under Obamacare. Turns out she doesn’t make enough money to qualify for subsidies.
“I’m like, ‘What affordable care?'” she said, referring to the actual name of the health insurance program, the Affordable Care Act.
Johnson falls into a gap in the health insurance program created by the writers of the law, a Supreme Court decision and North Carolina’s Republican-controlled legislature.
When the Supreme Court ruled that Obamacare was constitutional, it also said that the federal government could not make it mandatory for states to accept one part of the law – an expansion of Medicaid benefits to people at 138 percent of the federal poverty level.
When North Carolina’s legislature rejected that expansion, approximately 500,000 state residents were stuck. They earn too much to qualify for Medicaid under the state’s eligibility guidelines. But under the law, they don’t make enough money to qualify for financial assistance to pay for private insurance.
That leaves Johnson, who has a liver disease and eye problems, unable to afford health care.

To read the rest of this story, please visit fayobserver.com.