Patients often rely on physicians for information about their treatment alternatives. Unfortunately, that information is not always objective.
Consider a man with early stage prostate cancer interested in surgical removal of his tumor, but uncertain whether it is better for the surgery to be performed with the help of robotic technology. He asks his surgeon for advice, and the surgeon explains that, while robotic surgeries have some advantages (smaller incisions, less blood loss), the advantages are “tiny and unimportant.” And besides: “You do have some smaller incisions with the robotic, but if you added up all the incisions from all the ports and from the incision to remove the prostate itself, it ends up equaling about the same incision length.”
Can that physician’s description of robotic technology be trusted?
My friend and colleague Angie Fagerlin led a study of prostate cancer decision-making that took place across four Veterans Affairs medical centers. As part of that study, she audio-recorded clinical interactions between patients and their surgeons. In some of these interactions, patients asked about the pros and cons of robotic surgery.
As it turns out, some urologists worked at VAs that had access to robotic equipment and others did not. In an analysis lead by Karen Scherr (an MD/PhD student at Duke), our research team discovered that surgeons who had access to the robot were more generous in describing its advantages over standard “open” surgery. When no robot was available, physicians downplayed its advantages. This is illustrated in the following figure, showing the percent of statements physicians made indicating that robotic surgery was inferior, equivalent or superior to traditional surgical approaches: 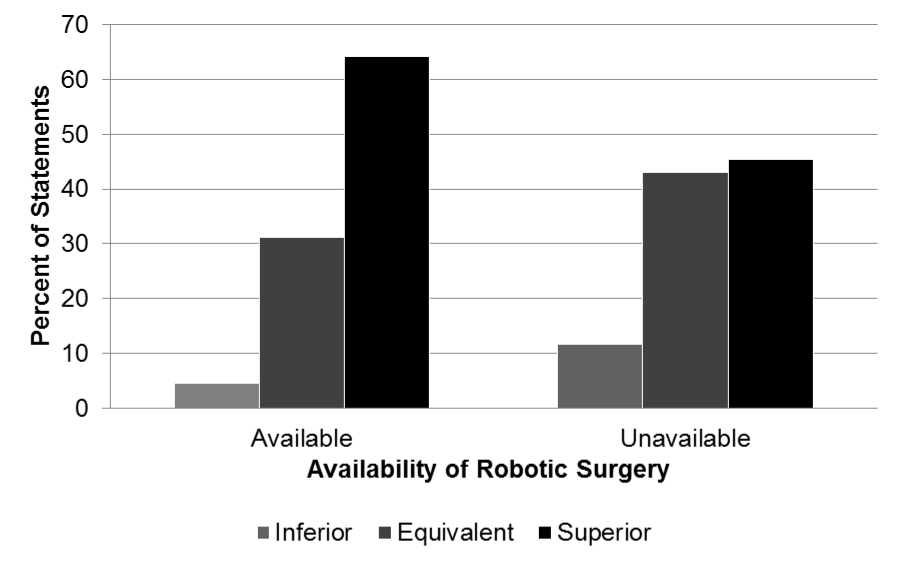 Importantly, I do not think physicians are willfully misleading patients about the pros and cons of robotic surgery. Instead, I think most physicians believe the robot is better (in the right hands) but when it is unavailable, doctors try to reassure patients that they will still receive state-of-the-art care. For example, one patient expressed anger that the robot was not available at his VA Hospital: “you see, that’s what’s so stupid about the VA!” The physician tried to assuage his concerns: “If you look at long-term outcomes related to cancer and cancer recurrence,” the surgeon said, “there has really been no difference. That’s why the VA system has not really invested in the robot.”
To read the rest of this article, please visit Forbes.