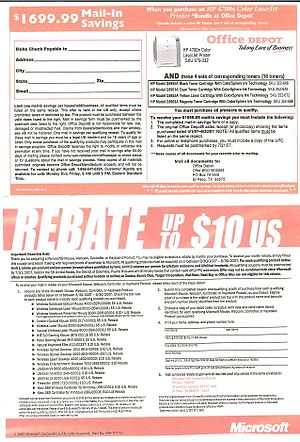 In two recent posts, I have posed questions about the appropriateness or inappropriateness of manipulating consumers by taking advantage of behavioral phenomena beyond their awareness. We behavioral scientists know things about human nature that most people haven’t learned. That is why we can fill books with visual illusions – our understanding of how the brain processes visual data allows us to play tricks on people. Indeed, this idea of visual illusions influenced the thinking of early behavioral economists and psychologists, who uncovered what they called “cognitive illusions.” (Daniel Kahneman discusses this topic in his book Thinking Fast and Slow.)
In one recent post, I posed the hypothetical case of a savvy businessman who created a snow pants rebate plan that simultaneously increased sales of snow pants while minimizing the chances that consumers would claim the rebates. (Why snow pants, you ask? Because I was born and raised in Minnesota, where we take snow pants quite seriously!) The businessman realized that a combination of the planning fallacy accompanied by a dash of unrealistic optimism, mixed with a pinch of self-regulatory failure and… Voilà: people would overestimate the odds of claiming the rebate in time… (Read more and view comments at Forbes)