An article from The Economist last April explored Margaret Thatcher’s influence on government spending in Britain during her tenure as prime minister. The magazine published a very interesting graphic, showing the rise of government spending in five countries. I thought I would reproduce the picture for you here, because it illustrates some fascinating issues: 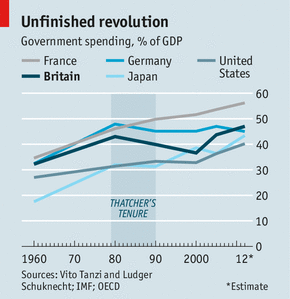 First, at the risk of being parochial, it is interesting to see that the United States is still on the lower end of government spending, compared to these other countries. Second, the long-term trend for all these countries points towards increased government spending, with stops and starts in some countries more than others, but with what looks like an inevitable uptick over time. That is a huge challenge for virtually every developed country on the planet.
And lest we, in United States, think we can brag about our relatively low government spending, remember that this figure illustrates spending as a percent of GDP. And the US has a higher GDP than these other countries. In terms of spending per capita, I doubt we are much better than any of these countries.
(Click here to view comments)