I have written about medical marijuana before, relaying research findings showing that the legalization of medical marijuana is associated with a reduction in use of pain medications.
Here’s another piece of evidence leading to a similar conclusion, from a study by the research team of Bradford and Bradford out of the University of Georgia. (Athens, Georgia being famous for its music scene, I wonder if Bradford and Bradford have ever formed a band. But I digress.)
The researchers found that in states that legalized medical marijuana, there was a reduction in medication use among Medicaid enrollees, across a wide range of medications. This reduction was especially notable for pain medications, which plummeted in those states: 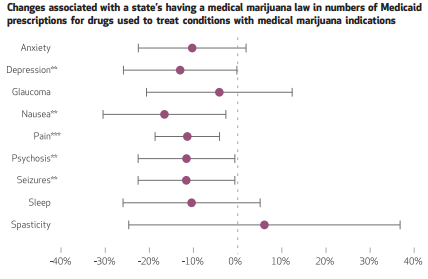 We have an epidemic of opioid abuse. Record numbers of Americans will die of narcotic overdoses this year. It is time to legalize and strictly regulate the use of medical marijuana. Opiates are known to kill people from overdoses. Pot doesn’t.