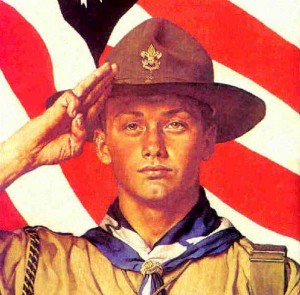 According to the New York Times, the Boy Scouts of America on Friday proposed ending its ban on openly gay scouts but continue to bar gay adults from serving as leaders. This policy is wrongheaded, regardless of whether you think homosexuality is right or wrong. By pushing gay men further into the back of the closet, the policy potentially increases the risk of the very thing the policy is intended to prevent. If the organization wants to protect Boy Scouts from sexual predators, it should welcome openly gay Scout leaders.
Does the Policy Makes Sense If Homosexuality is a Sin?
As a Christian organization, the Boy Scouts of America may want to continue their ban because many Christians believe homosexuality is a sin.  The problem with this view, a problem acknowledged by many conservative Christians, is that it is hard to call a person’s sexual preferences sinful, separate from whether they act out upon those preferences. I do not know many Christians who believe that homosexuality per se is a sin. Instead, the conservative Christians I know believe that homosexual sexual activity is a sin.  It’s not the preferences they view as being immoral, but the actions.  By this view, a gay man who resists the temptation to have sex with other men is not sinning.  Instead, he is showing moral strength.  (By the same token, wanting to commit adultery is not necessarily a sin, while cheating on your spouse is.)… (Read more and view comments at Psychology Today)