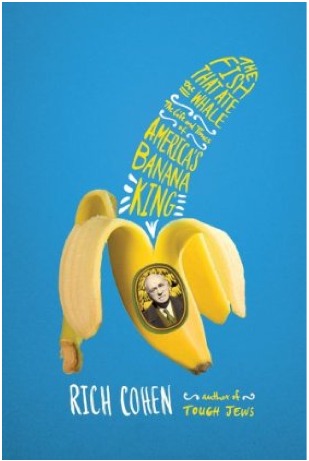 Recently I had the pleasure of reading Rich Cohen’s wonderful book: The Fish That Ate the Whale – the Life and Times of America’s Banana King. The book tells the story of Samuel Zemurray, a true rags to riches story, a man who started by spending his entire life savings – all $150 – to buy bananas that would’ve otherwise been thrown out, and selling them stop to stop out of a train car. He eventually ended up running United Fruit, the company most of us know for selling Chiquita Bananas. Cohen’s book is wonderful in large part because Sam the Banana Man was an absolutely fascinating person, admirable for his work ethic and entrepreneurial creativity, and horrifying the lengths he would go to – including overthrowing Central American governments standing in his way – to promote his business interests.
The book is also wonderful because of Cohen’s colorful writing. Let me share just a few examples with you. It starts right with the opening sentence of the book, which captures Cohen’s style well: “Sam Zemurray spoke with no accent, except when he swore, which was all the time.”
Cohen’s descriptions of the Central American landscape are equally colorful: “If you’re going to build in the jungle, build fast. Anything left for a season is lost. It turns first into a ruin, then into a story, then is forgotten altogether.”
To his descriptions of banana farming: “In the jungle, after a heavy rain, you can hear the banana trees growing.” And that’s not just an overwrought description. Cohen points out that banana plants can grow 20 inches a day.
And here’s something you might not have known about bananas: “The scientific name for the plant, Musa paradisaica, the fruit of Paradise, carries evidence of a medieval legend – that it was the banana, not the Apple, that the snake used to tempt Eve in the Garden of Eden, a belief that, considering the shape of the fruit and the nature of man’s Fall, makes sense.”
There is Cohen’s take on late night thoughts: “After all, some of the most profound moments of any life are lived between three and four in the morning, when you stare at the ceiling as the silence roars.”
I wonder what time of day Cohen came up with that sentence!
(Click here to view comments)