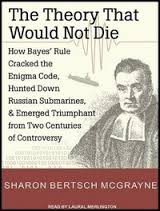 In The Theory That Would Not Die, Sharon Bertsch McGrayne brings to life many famous scientists and statisticians, the one of the moments that struck me most was when she described one of those people as he faced his death. That person was Jerome Cornfield, a prominent statistician at the NIH. Cornfield had been diagnosed with pancreatic cancer, and understood that he would be lucky if he lived more than six months. He had just undergone an operation to remove his cancer, a procedure known to be about as miserable to go through as any I’ve encountered, and one with a high operative mortality rate. A friend came into his hospital room and said: “Jerry, I’m so glad to see you.” Smiling, Cornfield replied, “That’s nothing compared to how happy I am to be able to see you.”
Near the end of his life, he passed on words of wonderful wisdom to his daughters: “You spend your whole life practicing your humor for the times when you really need it.”