Here is a game you can’t lose. You flip a fair coin ten times and every time it comes up heads, you get $20. Better yet, I won’t even watch you flip the coin, but instead will trust whatever you tell me about the number of times the coin comes up heads versus tails.
Would you be willing to play that game? And if you did play it, would you exaggerate the number of times the coin came up heads?
That was the question Alain Cohn and coauthors asked in a recent study. Cohn made sure participants realized the researchers wouldn’t be able to figure out the actual outcomes of the coin tosses. In other words, participants knew they could cheat and get away with it. In fact, for every person participating in the study, the researchers had no way of knowing whether or not they cheated. Yet the researchers not only uncovered significant cheating, but also discovered that the participants – bankers – were significantly more likely to cheat when they were reminded of their profession.
Since Cohn didn’t know the outcome of the coin tosses, how did he know whether participants cheated? He assessed cheating across the group of participants, rather than for specific people. The laws of probability show that when 200 people flip a fair coin 10 times, heads should come up 50% of the time, on average. The laws of probability also enabled Cohn to map out how often all 10 flips are likely to be heads, or how often nine tosses are likely to come up heads, etc.. Here is a picture of what statistics say should have happened versus what actually happened, with the darker bars showing what probability predicts and the lighter bars showing what the participants said happened: 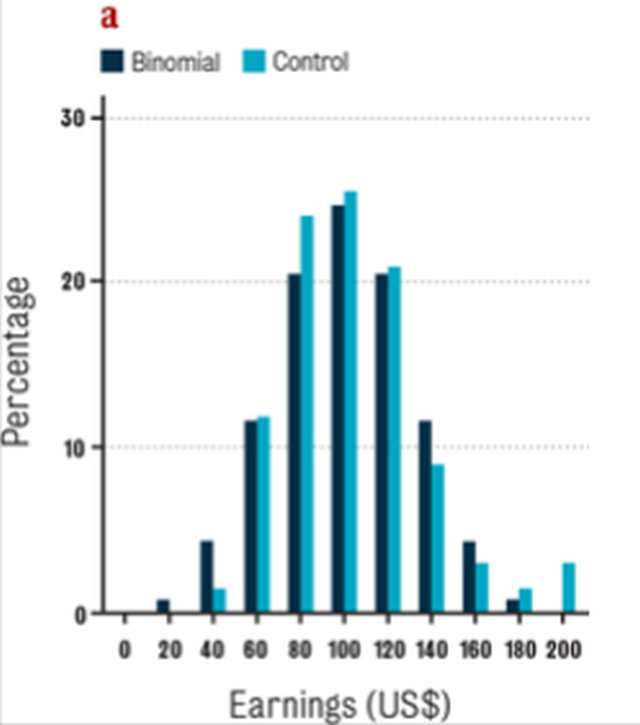 This picture shows that the bankers in this study, on average, cheated just a smidgen, reporting 51.6% heads rather than 50%. In addition, a small number of bankers said the coin came up heads all 10 times, even though statistics says that’s unlikely to happen at all in a population as small as the one that participated in the research.
Taken alone, this finding is not surprising. We know that some people cheat when given an opportunity, but that most people are honest the majority of the time.
But consider what happened when Cohn asked the bankers a series of questions that got them thinking about their careers. (To read the rest of this article, please visit Forbes.)