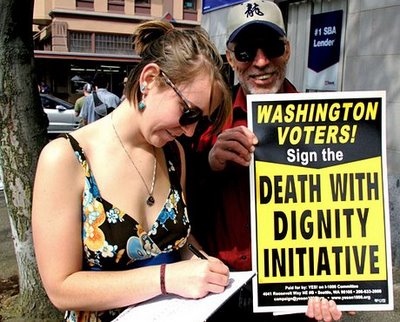 In 2008, the state legislature of Washington passed what was called the Death with Dignity Act, a law that legalized physician assisted suicide.  Under the law, terminally ill patients (predicted to have less than six months to live) can request prescriptions for lethal medications from their physicians, under a series of safeguards:  multiple requests for example, determination of competency, and the like.  Then, if the patients so choose, they can ingest the pills at the time of their choosing, thus controlling the manner and location of their demise, a last act of control in the face of an otherwise debilitating illness.
I have no beef with the letter or spirit of Washington’s law.  I have long contended that in rare circumstances, physician assisted suicide is a compassionate and morally appropriate policy.  Nor am I worried about the way the Washington law has worked in practice.  Indeed, a New England Journal of Medicine study from April demonstrates that patients have chosen assisted suicide sparingly, and without undue coercion from clinicians urging them to “off themselves”.
My beef is not with the letter of the Washington law, it’s with the name.  I think it is wrong-headed to equate assisted suicide with the concept of a dignified death.  Such a link unduly narrows the concept of dignity, and potentially undermines our ability as clinicians to help patients find other ways of achieving a dignified death… (Read more and view comments at Forbes)